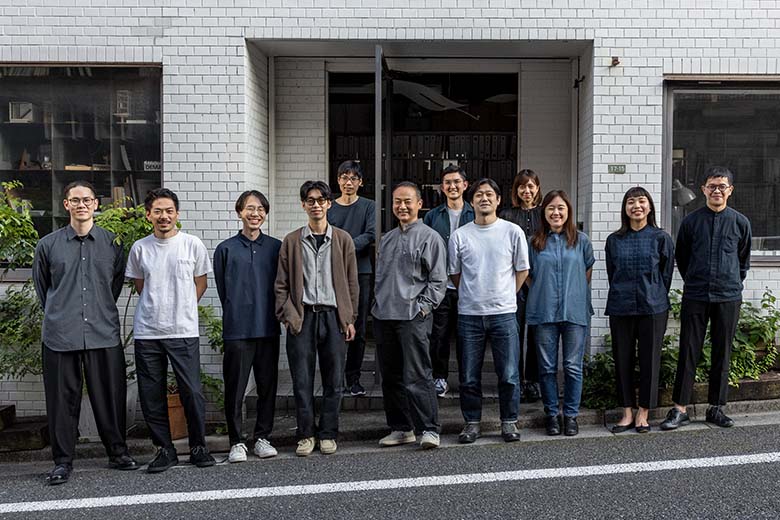 Keiji Ashizawa Design is a firm consisting of
members of various backgrounds and skills.

Born in 1973, Keiji Ashizawa graduated from the Yokohama National University Department of Architecture and began his professional career in 1996, working in an architecture firm. In 2002, he officially joined the bespoke steel furniture workshop ‘super robot’, with whom he had been working in parallel to his architectural practice, striving to produce original furniture and lighting fixtures. On the manufacturing floor, whilst working with his hands and learning through the process of trial and error, he expanded the possibilities of materials, establishing the basis for mottos and approaches that are still relevant to his practice today. In 2005, he became independent and founded Keiji Ashizawa Design, whose motto is ‘Honest Design’. With an approach that emphasises ‘craft’ rooted in materials and on-site, the company’s projects mainly involve the meticulous layering of details of different scales, from architecture to interior design and furniture design, and are widely developed, including overseas.

At the same time, they also focus on social activities. In 2011, they frequently visited the city of Ishinomaki to support the recovery of friends affected by the Great East Japan Earthquake. The idea was to create a system that would make it easier not only for themselves but also for citizens and volunteers to take action that would lead to recovery. The Ishinomaki Laboratory was set up to equip the people of Ishinomaki with tools and materials to help them rebuild on their own. The company then designed original stools and benches that can be built with a DIY feel, even when materials, tools and skills are limited. Workshops were held together with designers and companies that empathised with the idea, creating a flow of production with local people. The product range designed at this time is currently sold outside the region as an original brand with added value. In addition, following its incorporation in 2014, the Ishinomaki Laboratory is now co-creating with international designers as well as promoting ‘Made in Local’ projects, in which locally available timber is used and manufactured locally. The initiative has deepened with the launch of ‘Ishinomaki Home Base’, a multi-purpose space that includes a guesthouse, showroom and cafe serving craft beer.

In 2016, the gallery DESIGN KOISHIKAWA was founded to visualise the possibilities within a building that was to be demolished in two years. The building that was set to vanish became a place where the future began. The gallery welcomed creators from all over the world and generated a diverse range of exchanges through solo and group exhibitions until it closed in 2018.

In efforts to connect the thoughts and feelings felt by individuals, Ashizawa will continue to aim for unconventional practices while crossing disciplinary boundaries. He is also committed to co-creating with the next generation by giving back to society and contributing to the future of the career he has cultivated, lecturing and teaching at home and abroad, and serving as a jury member for design awards. At the same time, the second floor of the Ashizawa Office Annexe has been turned into a guesthouse. It welcomes partners, artists, designers and interns from Japan and abroad as a family, contributing to the workplace and also to the development of the design industry and cultural exchange.