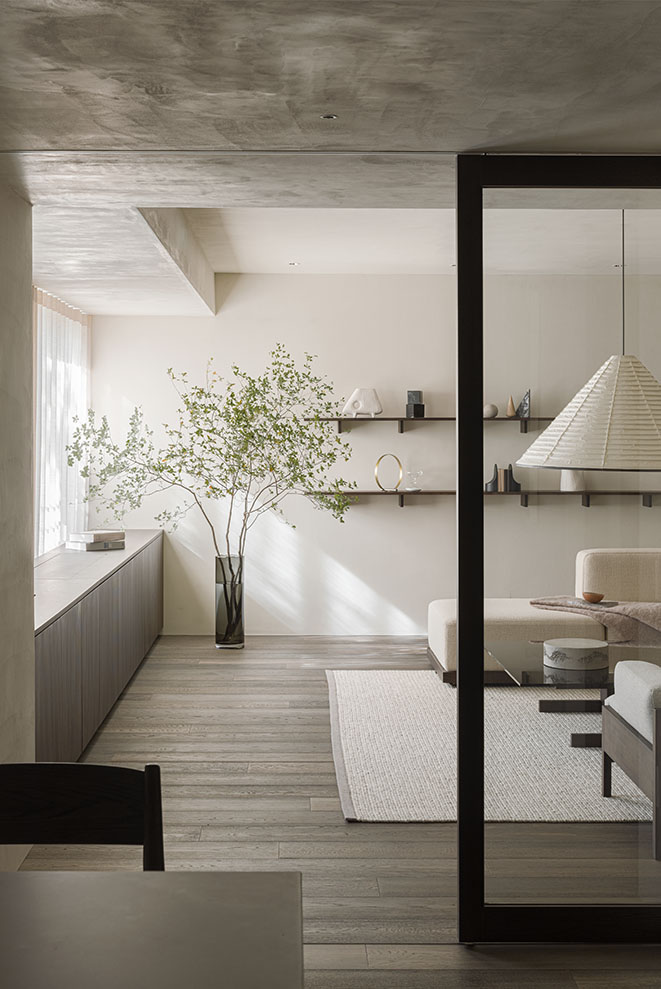 Azabu Residence is a renovation of an apartment built in 1988, located in a quiet residential neighbourhood tucked away from one of the major highways in Nishi-Azabu, Tokyo.

The site is used luxuriously; the apartment has a calm appearance with a well-designed garden leading to the entrance, a rare sight in recent Tokyo. After passing through a dimly lit corridor, we found a large 240 sqm room, which had a small balcony. Although it was not a usable exterior space, we noticed that there was ample natural light coming into every room. The quality of the light, the calm dark tones of the apartment, and the inspiration of the American mid-century interior design, an idea from Norm Architects, determined the colours of the floors, walls, and furniture. Karimoku not only provided furniture, but also created fixtures, joinery and equipment as well. This was one of the most important factors in creating a coherent look and consistent quality throughout the FF&E elements.

Similar to previous projects by Karimoku Case Study, Azabu Residence incorporates design philosophy and aesthetic of Japan and Scandinavia. The interior creates a serene ambience by using various natural elements and a muted colour palette. We applied Japanese stucco, Shikkui, with controlled tones for the walls and ceilings. Textiles used for the sofas, chairs, curtains, and washi paper used for the lamps were carefully chosen as these are elements that one can touch and feel. The juxtaposition of such materials with timber elements were studied several times to find the best combination.

The zoning of the space was drastically changed from the original plans by getting rid of corridors and creating a continuation of spaces. Additionally, there are sliding doors in between each room so that they can be connected to create a larger space or divided into smaller spaces. There are alcoves situated in each room in order to allow space to display objects such as flowers and artwork. Such a space is similar to tokonoma, alcoves used as decorative spaces in traditional Japanese architecture, allowing each room to have different impressions and creating a sense of season and softness throughout the space.

As soon as Azabu Residence was open to the market it was sold with the furniture included. It became a project in which we realised again the importance of creating space holistically.